Trichoderma species are fungi that exist in almost all soils and other habitats. They are one of the most cultivated fungi in the world. In the presence of the roots of the plants, the population of this fungus is greatly increased as they colonize the root.
Some Trichoderma are specific to the rhizosphere and are, for example, able to colonize and grow in roots. Different strains of the habitat of the rhizosphere can be added to the soil using different methods and even seeds. When they are contacted with the roots, they colonize the root surface of the root, depending on the species. Therefore, if you want to add Trichoderma fungus as a seed treatment agent, it is best to use suspension and disintegration at the root surfaces, or even one meter or more of the soil surface, and these fungi can be found in a suitable and sufficient population. Spraying in residual soil for 18 months and colonosizing the roots for up to 18 months. This feature is not seen in all strains.

In addition to colonosizing the roots of the plant, some Trichoderma species attack other fungi and disrupt them and use their food. Since Trichoderma grows and breeds better when there are many healthy roots in the environment, they have different mechanisms for attacking other fungi as well as for enhancing and improving the development of root growth and development. Several generic new methods, both for biological control and for plant growth, have recently been discovered in relation to these fungi, and it has been discovered that several separate genes and different gene products are involved in these processes. The discovered mechanisms are as follows:

– Mushroom parasite
– Antibiotics
– Race to get more food and space
– Increasing plant tolerance to environmental stresses through effects on root and plant growth
– Analysis and distribution of mineral food for the plant
– Induction of plant resistance
– Inactivate the malignant enzymes of root pathogen.

Taxonomy and Genetics
Most Trichoderma species do not have any sexual stages, but only produce non-sexual spores. However, for a few strains of Trichoderma, the sexual phase is known, but these species are not species that is usually considered for biological control purposes. The sex stage of some species is from ascomists and in the genus Hypocrea. The traditional classification based on morphological differences is primarily due to the structure of the sporulation, but more molecular methods are used. As a result, the taxon of this fungus has recently reached 9 to at least 33 species.

Most strains of Trichoderma are highly compatible with an unusual life cycle. In the absence of miosis, the formation of chromosomes is normal and different strains have different numbers and sizes of chromosomes. Most cells have multiple nuclei and some oily cells have more than 100 species. Various non-genetic factors, such as the parasitogenous recombination, mutation, and other processes, cause a discord between the nucleus in an organism (talus). Therefore, these fungi are highly adaptable and rapidly evolving. There is a great variety in genotype and wild species phenotype.
While Trichoderma wild species are highly adaptable and may have heterocratus (containing non-contrasting genotypes in an organism) (and therefore highly variable), the commercial strains used to use biological control in agriculture should be hemocyric ( The cores are the same or similar genetic assets. This is due to the profound changes that result from genetic variation and allows these commercial species to be genetically distinct and unchangeable. This is a very important item of quality control for any company that wants to commercialize this product.
Some strains of Trichoderma are more effective in controlling pathogens than others, and some may also be ineffective against some fungi.

Life cycle
This organism, Trichoderma, grows in the form of a typical fungal hyphy, with a diameter of 5 to 10 micrometers. Sporulation is uniform and spores are single cell and usually green and thai (usually 3 to 5 micrometers in diameter) and are produced and released in large numbers. It also has single-cell relaxation chlamydospores, although two or more chlamydospores may be combined.
Sensitivity to insecticides and toxins
Trichoderma has an intrinsic and intrinsic resistance to most agricultural chemicals that contain fungicides, although this strength can be high or low depending on the type of strain. Some strains are resistant to certain pesticides. Most of the biocontrol products made from Trichodrome have different resistance to toxins, which are packed with strength and dosage.
Uses of Trichoderma
These high-potential fungi are commercially used in many different ways. These include:

Food and Textiles:
Trichoderma species are a large variety of different extracellular enzymes. They are commercially used to produce cellulase and other enzymes that destroy complex polysaccharides. For this purpose, they are often used for food and textile industries for these purposes. For example, the enzyme cellulase of these fungi is used in the production of denim fabrics. This enzyme helps to create a soft state and a white state-washed jin. Enzymes of this microorganism are also used in poultry feed to increase the heme cellulose digestion from barley or other products.

As a biocontrol agent:
As noted, Trichoderma is used to control plant diseases, there are several reputable companies that produce such state-owned products.

Plant Growth Stimulus:
Years ago Trichoderma’s ability to grow plants has increased, especially their ability to produce more powerful roots. Many of the mechanisms involved in this ability have been identified.
Some of these abilities are very important. Recently, researchers have found that a strain can increase the number of plant roots, even those deep in the ground (about one meter below the surface of the soil). These deep roots make herbs, such as corn and ornamental plants, more resistant to drought.
Perhaps one of the most recent researches of the scientists is that they found in experiments that the root of which was strained by a strain of Trichoderma  had about 40% less nitrogen fertilizer than the root of which the fungus had less, has it. Since the use of nitrogen fertilizer is limited by the permissions of the environmental organization to reduce damage to sewage and other groundwater and below, the use of this organism can be a good way for farmers to maintain and increase productivity. While at the same time complying with the new rules that are likely to be imposed.

Be the first to review “Trichoderma” Cancel reply 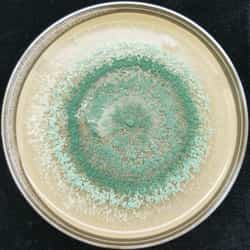