Trichoderma fungicide Nikooraee for controlling of soil pathogens: Soil contains many microorganisms incloding those that are essential for good product growth. Some are fungicides and some are nematicide or bactericides. recent research has shown how to manage the soils microflora in favor of good microbes. one way is to add some of these beneficial germs to the farms  to create a favorable envirment for the soil. many of these added mocrobes fail in many cases due to competition with native mocroflora.

A fungus called Trichoderma, which has special biocontrol properties (as biological fungicide), has be able to colonize the root completely under field conditions and have been reproducted. this strain has isolated from Iranian soil flora and has been tested for root colonization and antagonistics properties. It is characterized by its greater ability to colonize the roots and help the plant absorb better nutrients as well as eliminateroot and crown pathogens.

Growers of ornamental plants, vegetables, trees and flowers can use this biological fungicide to reduce the risk  of plant deficiency due to food shortages and root rot.

Trichoderma fungicide can be applied to plants in different ways throughout the planting and maintenance process. These methods are:

۱- Before planting seeds or seedlings:

For seed treatment, add 5 gram of Trichoderma fungicide powder per each 1 kg seed. It is better to moisten the seeds for better adhesion of the biological fungicide powder. As the seeds grow, the Trichoderma also grows around the soil and surrounds the roots in all directions therfore the harmful fungi cannot even reach  the root and grow there. the fungus mycelium extends beyond the root into the soil and delivers nutrients to the root. Trichoderma is able to change the foods that are not absorable for plant into the absorable form and delivers them to plant at the same time, however, they will not allow fungal pathogens to come around.

۲- with seeds and seedlings planting (sheding Trichoderma fungicide within 20 cm of seed or root of seedlings or impregnating seed and then placing them in soil.

۳- after planting the seed or seedlings and spraying the biological fungicide roundabout in a circle of 20 to 30 cm in depth of 2 to 30 cm soil.

۴- after planting, Mixing of Trichodermaroot fungicide powder with soil around the plant.

۵- Pour the fungicide powder directly into the irrigation water.

Trichoderma (biological Trichodermaroot fungicide) grows on the root surface and is here that it can cure the diseased troots as well as stregthen the root after killing the pathogen. Trichoderma spores can survive in soil. they are more around the root that contain root secretions and feed on these secretions. One of the important diffrences of biological fungicides with other fungicides is that the amount of biological fungicides will increase over time in the land but conventional fungicides will expire after some time. so you may need to re-use them. Another is amount of use.  In the case of Trichodermaroot, you need to take a small amount at first, but in the case of regular pesticides you should use more in the control of the diseases. Nikooraee fungicide can protect your plant against pathogens and environmental stresses all season long can lave for years in treated soil.

Thus, when trichoderma encircles the root of the plant, it improves the plant in two ways: one by killing fungi that cause root and crown rot; two by protecting the root physically and by absorbing nutrients from distant areas into the soil. The root and also the conversion of non-absorbable food by the plant to the absorbent food so the root grows rapidly after treatment of the disease and reaches proper volume.
Trichoderma kills several major root rot fungi: Pythium, Rhizoctonia and Fusarium. This process is called mycoparasitism. Trichoderma secretes an enzyme that solves the cell wall of other fungi. It can then enter and feed on pathogenic fungi. The strain used in Nicoderma’s Tercodermarut excretes more endocytinase key enzymes than wild-type strains, so this biological fungus grows better and releases more enzymes than wild-type strains.

What plants are Trichoderma nicurai effective on?
This species of Trichoderma has very low host specificity and colonizes most plants. This fungicide on various plants (tomato, melon, watermelon, cucumber, onion, apple tree, plum tree, citrus, kiwi tree, vegetable, sugar beet, carrot, sansuria, gladiolus, antrium, orchid, carnation, house plants, berries Green, raspberry, etc. were tested and were able to colonize 88% of their roots with no significant difference.
Biological fungicide Trichoderma as mycorrhizal (root-fungi)
There are many nutrients in the soil that the roots of plants cannot absorb, including various forms of nitrogen. Trichoderma fungi develops in areas farther from the root and progresses to the smallest pores between the soil (due to its very narrow mycelia) and can retrieve material from the farthest parts where the root is unable to reach and to plant. It also converts many of the nonabsorbable materials into usable materials for the plant.
What to do to make biological fungi work better?
Since trichoderma fungicides contain a living microorganism and each microorganism needs air so the soil and soil flood conditions can slow down its growth, so try to avoid flooding in the soil.

In what soils can Trichoderma biological fungicide be used?
According to research done on this strain, the weaker the plant, the more trichoderma develops and the more force it takes to heal the root, so the rate of disease recovery is higher.
Trichoderma can grow and protect plants in most soils and can grow much higher in soils with higher calcium, however, if soil has low calcium levels it can colonize the root and counteract soil pathogens also.
When use Nikooraee trichoderma fungicide?
In agar culture, if the temperature is below 30 degrees Trichoderma (within the Nikooraee biological fungicide) grows well. At low temperatures, the fungus continues to grow, but at a slower rate. It generally grows best at temperatures of 20 to 30 degrees.

Thus, when Trichoderma encircles the root of the plant, it improves the plant in two ways: one by killing fungi that cause root and crown rot, two protecting the root physically and by absorbinf nutrients from distant areas into the plant 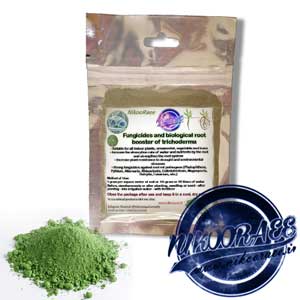